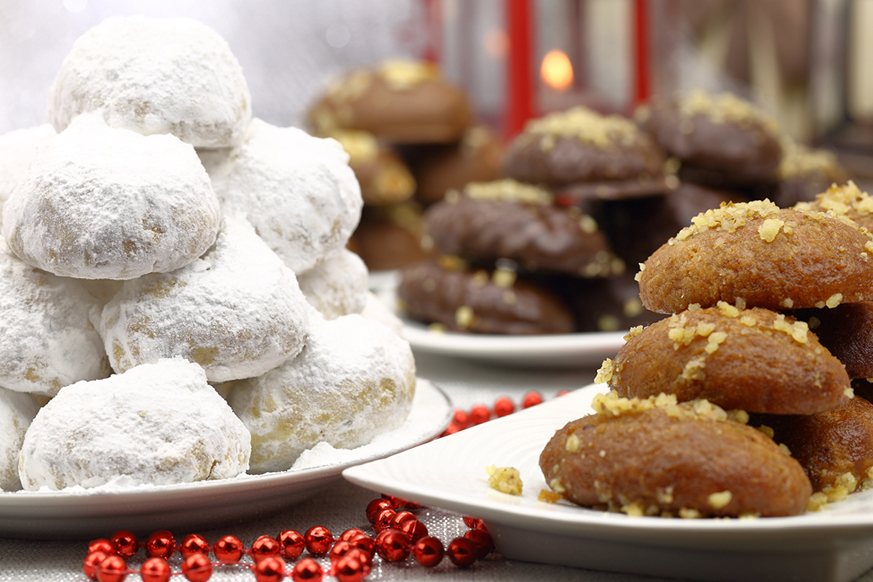 Christmas and New Year traditions in Crete, as in the rest of Greece, are rich and many, and while most date from the earliest Christian times, some go back much further, even to ancient pre-Christian folk legends.

Kalanda (carols)
On the mornings of Christmas Eve and New Year’s Eve, children in small groups go from one house to the other, asking their neighbours if they would like to hear a carol.If the answer’s ‘yes’ (which it usually is!) the children’s serenade is rewarded with sweets or coins.

Agios Vassilis (Saint Basil)
Greece has its very own Father Christmas. While most countries have Santa Claus (the name originating from ‘Saint Nicholas’) Agios Vassilis is the Greek equivalent, and is the name of a real saint who was a bishop in Asia Minor (modern day Turkey) in the 4th century, known for his generosity towards the poor. Unlike the western Santa Claus, Agios Vassilis delivers his gifts in the early hours of New Year’s Day.

Vasilopita (St Basil’s cake)
A sweet cake prepared as dessert for New Year’s Eve dinner, Vasilopita (named after Agios Vassilis) is served just after midnight. Baked with a coin inside, the lucky diner who is served the slice with the coin will have good fortune for the coming year.

Kallikantzaroi (devilish imps!)
According to folk tradition, from Christmas Day until the Epiphany (the twelfth day of Christmas), small evil spirits that live underground appear, to tease and play pranks on people. Depicted as tiny monsters, Cretans have various traditions to thwart them, including burning shoes in the fire!  On the day of Epiphany, in villages, often the local priest will go from house sprinkling holy water to scare the spirits away.

Christmas sweeties
Two types of delicious sweet biscuit are synonymous with the festive season in Greece –
Kourambiedes, a shortbread, made with almonds and dusted with icing sugar, and Melomakarona – made from sugar, flour, olive oil, and honey, with a sprinkling of ground walnuts and cinnamon. Christopsomo (Christmas bread) is often on the table too – a round sweet bread, flavoured with cinnamon, orange and cloves.

Pomegranate – the New Year symbol
Since ancient times, the pomegranate has been the symbol of good fortune, youth, and fertility. Often a ceramic pomegranate is given as a gift at this time of year, and the custom comes from the old tradition of breaking a real pomegranate on the doorstep of one’s house, the seeds and ruby-red juice spreading everywhere, to bring happiness, good health, and abundance to members of the household.

Visit Santorini in a day – from Rethymno!

Everyone yearns to visit the most famous of all Greek islands - Santorini, the jewel…

Tired of the Beach? Argiroupoli Is a Captivating Mountain Destination

Just thirty minutes drive from Georgioupoli, you will discover one of Crete's most beautiful and…