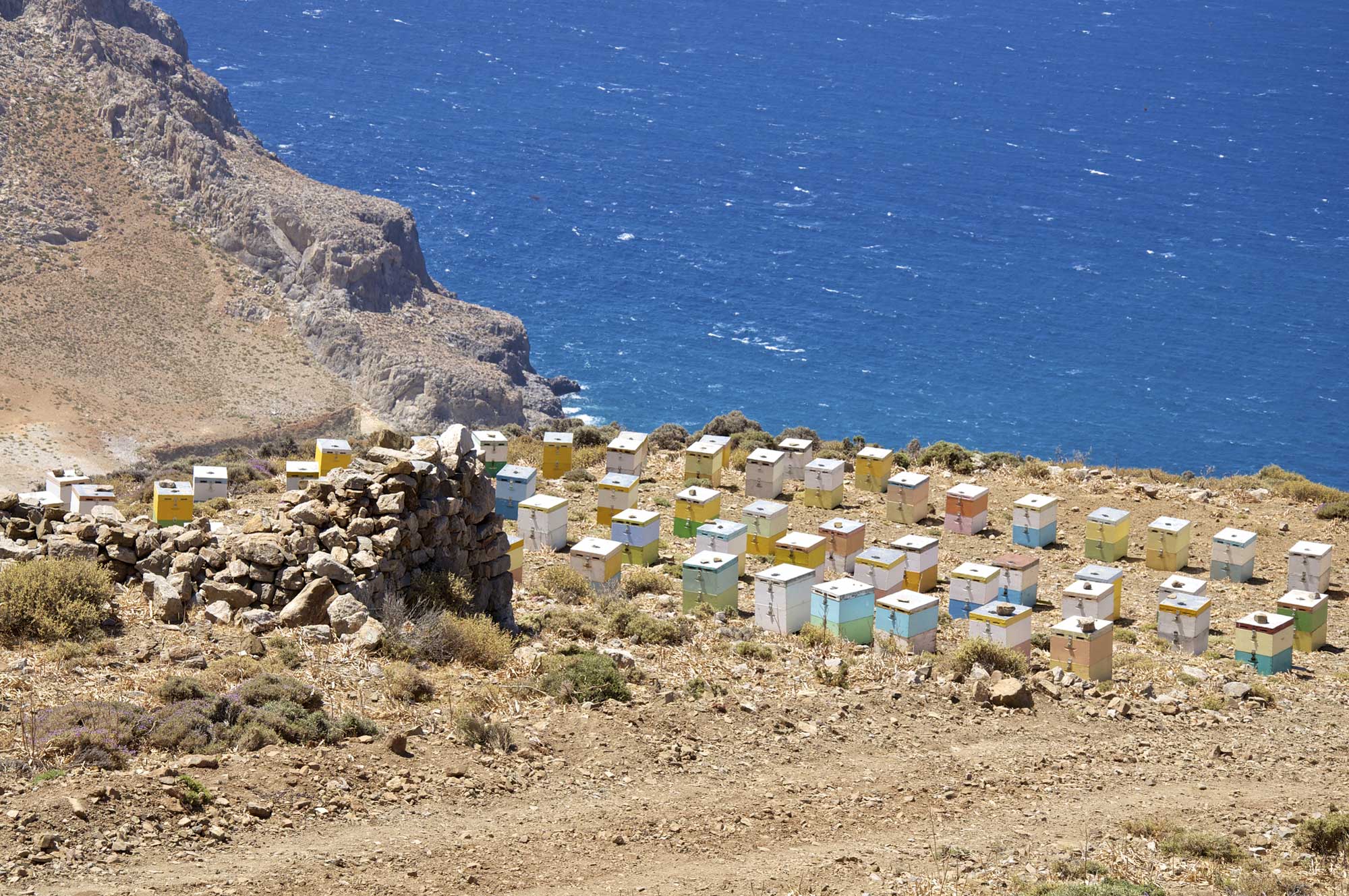 History of Beekeeping on Crete

Honey is one of the flagship agricultural products on Crete, valued as much as olive oil and citrus farming. Historical evidence shows that the art of beekeeping arrived in Greece from Ancient Egypt, most likely through Crete. Indeed, the oldest hives found here date from 3400 BC. The clay hives were unearthed at Phaistos, the Minoan palace in the south of the island.

As the Ancient Greek grammarian Antoninus Liberalis testifies in his Metamorphoses, the bees were sacred on Crete.

In Crete, there is said to be a sacred cave full of bees. In it, as storytellers say, Rhea gave birth to Zeus; it is a sacred place an no one is to go near it, whether god or mortal. At the appointed time each year, a great blaze is seen to come out of the cave. Their story goes on to say that this happens whenever the blood from the birth of Zeus begins to boil up. The sacred bees that were the nurses of Zeus occupy this cave.

As the product of a sacred being, honey is considered holy too. In fact, it is still used routinely for its symbolic nature in traditional customs. For example, at weddings or baptisms, guests enjoy Xerotigano, a delicate pastry deep-fried, then dipped in honey and sprinkled with sesame seeds and cinamon. Another custom is for the bride and groom to eat a spoonful of honey with walnuts during the religious service.

Honey is an important source of subsitence for Cretans. The island ranks fourth at the national level for honey production. According to statistics from 2004, there are more than 2.200 apiarists on the island with more than 143.000 beehives.

Cubic wooden hives are set in sunny areas along the rugged slopes of the mountains in areas rich in endemic vegetation. You’ll see them scatered all over the island, especially in Sitia, on the Lasithi plateau, in Sfakia, Kissamos, Chania, and so on. Beekeepers are particularly fond of thyme, which produces a highly aromatic honey with a unique taste.

Cretan honey is famed all over the world for its unique flavor, but also for its miraculous health benefits. Traditional honey produced on the island is raw and unfiltered, an all-natural product with distinctive, pure taste.

It is cherished in most Cretan homes and consumed raw incorporated in traditional recipes like pies and cakes, but also in savory dishes. Notably, the Cretan thyme „thymari” (θυμάρι) honey is the “liquid gold” among all raw honey produced on the island.

Hippocrates – the father of modern medicine – prescribed honey for all kinds of ailments.

Beyond legends and fiction revolving around the health benefits of honey, here’s what’s proven:

Honey is rich in natural nutrients

Honey is a rich aliment, full of amino acids, proteins, enzymes, vitamins, and minerals. It contains small traces of B vitamins as well as vitamin C.

Honey is effective in calming a sore throat

Our grandmothers didn’t need science and studies to prove that honey can be used to alleviate a cough and to soothe a sore throat and science backs their beliefs.

“Have a stomach pain? Take a minute before you pop an antacid, raw honey researchers have proven that taking two to three ounces of raw honey a day helps wipes out the toughest to treat stomach ulcers, without destroying the good bacteria we need in our digestive systems, and helps stop a stomach ulcer from forming,” according to BeeRaw.

These are just some of the scientifically proven health benefits of honey. Surely, there are more, especially considering that honey is a superfood. Just keep in mind that raw honey may carry harmful bacteria that can cause botulism and that raw honey is dangerous for babies and children aged less than one year.

In Greece, perhaps more than any other European country, Easter is not only a deeply…