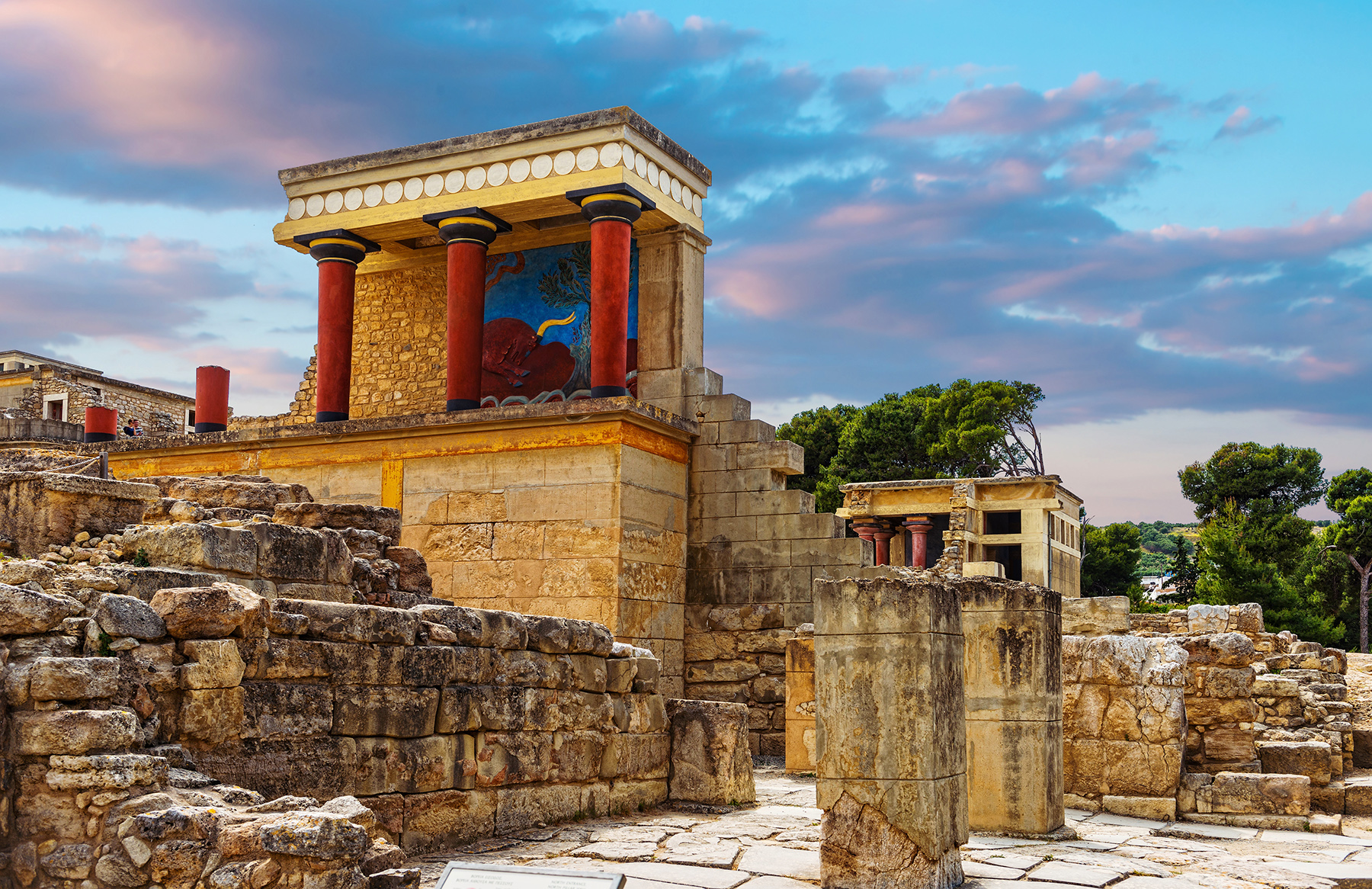 If you’re up for an unforgettable day out by car from Georgioupoli, Crete’s most popular historical site – the Palace of Knossos – is only a 90-minute drive. By happy coincidence, Knossos is also the gateway to Heraklion wine country – the richest part of the island for wine production, so your trip to explore Crete’s ancient history can be combined with a winery visit or two and a delicious lunch. Connected by good roads, the area has a number of fine tavernas, notably at Archanes, Houdetsi, Skalani and Peza.

Just south of Heraklion, Knossos – the site of the capital of the Minoan civilisation that ruled Crete 4000 years ago – is a must-see destination for anyone wanting to delve into the mysterious history of Crete. Knossos is the most popular archaeological site on the island, so to avoid the queues (and high temperatures), plan to arrive before 10am at the latest and allow a couple of hours to explore.

Open 8am until 8pm, admission is €15 for adults and children are free. The ticket price includes admission to Heraklion Archaeological Museum. It is well worth investing in a tour by a licensed guide. Having an expert to show you around will make a big difference to understanding the site. Guides can be pre-booked (including the admission ticket, or you can leave it until you arrive, and join one of the groups that depart from nearby to the ticket booths. Guide prices vary, so it’s worth shopping around. Audio guides are available.

Knossos is synonymous with the Ancient Greek myth of Theseus and the Minotaur in the Labyrinth. Many believe the labyrinth was Knossos itself. The first palace on the site is thought to have been built around 1900BC, and rebuilt two centuries years later following an earthquake. By 1400BC the palace had been destroyed and the Minoans’ rule over Crete was no more. While the site’s excavation started in the 1870s, it was British archaeologist Sir Arthur Evans whose digs between 1900 and 1930 – involving controversial reconstructions – who brought key parts of the palace to life.

Almost three quarters of Crete’s wines come from the Heraklion region, with two main grape-growing areas, starting just south of Knossos. One is around Peza and Archanes, the other, to the west, near Dafnes. Heraklion’s wines share one thing in common in that the grapes are nurtured by the nutritious calcium-rich clay soil that is found across the region.

Renowned for its white Femina and reds (Aspro Lagos and Enotria), Douloufakis Winery (2810792017, open 10-3.30pm) in Dafnes, with its Cretan grape varieties is well worth a stop. Lyrarakis (698105068, open 11-4pm), 6km south of Peza, is highly recommended. Known for reviving almost extinct local grape varieties, Lyrarakis is one winery at the forefront of creative winemaking.

At nearby Houdetsi Rhous Tamiolakis Winery (28107 42083, visits by appointment) produces 50,000 bottles a year of some of the finest organic wine in Crete. Grape varieties include the traditional red varieties of the Peza region – Kotsifali and Mandilari. Whites from the Vilana grape also feature. On the national road between Heraklion and Moires, the Silva Daskalaki Winery (28107 92021) at Siva is a fascinating example of a winery combining organic farming methods with a philosophy of ‘biodynamic’ cultivation.

Aside from offering tastings many of the estates have small museums showing the history of winemaking in the region. All sell their wines below normal retail prices.

Best Things to Do in Georgioupolis with Children

Although it is a small seaside resort, if you visit Georgioupolis with children, they will…

5 Things to See and Do in Souda

A short, 40-minute drive from Georgioupoli, Souda is a charming seaside destination, with a beautiful…

Five Things to Do in Georgioupoli at the Apex of Almiros